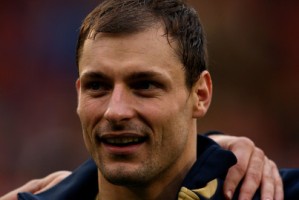 The Serbian international striker will be out of contract at Standard Liege at the end of the season and would pocket a £2.5million signing-on bonus if he signs for the Kop outfit.

A Liege source confirmed that it looks like it’s 50-50 between Liverpool and AC Milan for Jovanovic.

I was also revealed that there are many other clubs interested but Liverpool and AC Milan are ahead of the rest.

It is believed that the striker will be making a decision very soon.