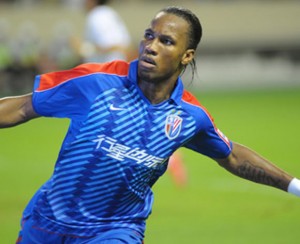 Marcello Lippi has urged Milan to sign Didier Drogba because the former Chelsea striker is “still a beast”.

But the World Cup winner, now the coach in the Chinese Super League, doubts whether the Ivorian will take a cut in his £820,000 a month wages.

Milan and Juventus are vying for the signature of Drogba, who is training with Chelsea before playing in the African Nation’s Cup next month.

Lippi said: “I Robinho and Alexandre Pato really are leaving Milan, then I’d see Drogba doing better for the Rossoneri than Juventus.

“He played against my Guangzhou Evergrande recently and is still a beast. He really makes the difference on the field.

“Drogba would be a precious addition to the squad both in Serie A and the Champions League.”

But Lippi, the Italy coach in 2006, added: “He didn’t choose to go to China by following his heart or making a footballing decision. It was purely for the money, as he earns €1m per month. Do you think he’d agree to halve his wages to come and play in Italy? I have my doubts.”

David Beckham Drops By For A Visit During AC Milan Training