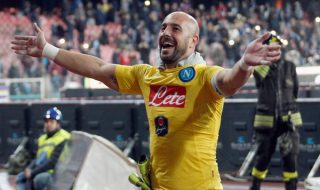 AC MILAN have signed former Liverpool stopper Pepe Reina on a free after he left Napoli.

The Italians also snapped up Croatia defender Ivan Strinic as his Sampdoria contract had expired.

Both veterans have signed three-year deals at the San Siro as Gennaro Gattuso tries to add experience to his squad.

He could be seen consoling Sergio Ramos on the field after hosts Russia stunned the Spanish on penalties.