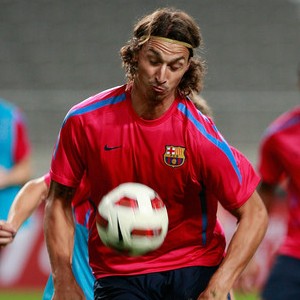 Sensational transfer news are out and it has been reported that AC Milan have announced the €24 million signing of Barcelona striker Zlatan Ibrahimovic.

The Rossoneri confirmed the transfer yesterday stating : “A.C. Milan announce the signing from F.C. Barcelona of Zlatan Ibrahimovic, on a free loan with the option to buy for €24m,”

“The Swedish champion will undergo his medical on Monday morning, after which he’ll sign the contract tying him to the Rossoneri for four years.”

It is quite a coup for Milan to have captured Ibrahimovic on a free loan deal just 12 months after Barcelona paid effectively €66m to take him from Inter.

The Spaniards reportedly paid €46m cash plus Samuel Eto’o, who was valued at €20m.

“Why did I choose Milan? Because they are one of the strongest clubs in the world, with a great tradition.

“Ronaldinho and Alexandre Pato represent a fantastic strike force, now it is up to us. The Milan fans will certainly have fun.”

However, the return to San Siro will not sit well with the Inter supporters he walked out on a year ago, missing the Treble campaign.

“I don’t think they care about me now that they have won everything. As for me, I want to win the Champions League, the Scudetto and everything it’s possible to win with Milan.”