Reports are out claiming that AC Milan striker Mario Balotelli has refused to shutdown talk of a move away after the World Cup. 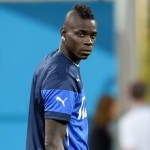 The former Manchester City ace is emerging as a £30 million target for Arsenal.

Asked about the rumours, the Italy international said: “About my future or the transfer market I know nothing.

“We will see what will be after the World Cup.”