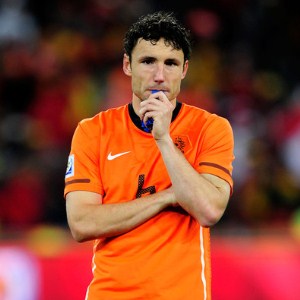 Italian giant AC Milan are reportedly on the brink of securing the services of Bayern Munich midfielder Mark van Bommel.

The Dutch international star could see a move to Milan agreed later today with his agent, Mino Raiola, in Munich for talks with Bayern officials.

It is believed that Van Bommel is keen on the move and all signs are that Milan could make an announcement in the coming hours.

The Dutchman also attracted Premier League clubs Manchester City and Tottenham, but Raiola’s close ties to the Rossoneri have swung the deal in their favour, says Radio Sportiva.