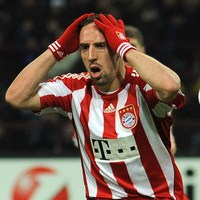 Sensational news are out and it has been revealed that Italian champions AC Milan are ready to test Bayern Munich’s resolve over unsettled French star Franck Ribery.

Corriere dello Sport has reported that the French international winger is ready to ask away from Bayern after a disappointing campaign and Milan are already in contact with his camp.

The newly crowned Italian champions believe they can sign the 28 year old for €30 million, though are willing to go as high as €35 million for the all-action midfielder.

Milan patron Silvio Berlusconi has promised fans a mega signing this summer and Ribery could be the man.

However, should he become available from Bayern, the likes of Manchester United, Barcelona and Real Madrid are sure to make it difficult for the Serie A champs to land the French star.