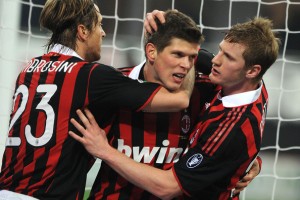 Interesting news are out and it has been reported that AC Milan are eyeing a move for Manchester United defender Nemanja Vidic.

Local British newspapers have reported that the Italian giants will offer Dutch striker Klaas Jan Huntelaar as a makeweight in the deal.

Vidic, now age 28, is already a £20million target for Real Madrid at the end of the season, although United would like another £5m.

The offer of Huntelaar, now 26, in part exchange could appeal as Manchester United have been short of senior forwards all season. Mario Balotelli Risks Pricing Himself Out Of Arsenal Move