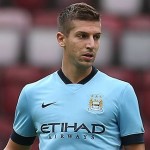 Reports are out claiming that AC Milan are moving to trump Schalke for Manchester City defender Matija Nastasic.

The Telegraph reported that Nastasic has been told he can leave the Etihad Stadium this month by City manager Manuel Pellegrini.

And despite Schalke coach Roberto di Matteo publicly claiming that his club were close to sealing a deal for the Serbia defender, Milan have been given encouragement by City to pursue the 21-year-old, with no transfer yet agreed with the German club.

Arsenal and Tottenham both expressed an interest in completing a late move for Nastasic during the summer transfer window, but it is understood that Milan or Schalke are now his likeliest destinations. Thomas Vermaelen Determined To Fight For His Place At Arsenal