Reports are out claiming that AC Milan have transfer-listed striker Mario Balotelli. 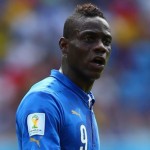 The former Manchester City firebrand is being linked with a return to England, where Arsenal and Liverpool are keen.

Corriere dello Sport claims that Balotelli has been placed on the transfer list by Italian giants AC Milan.

Liverpool will be expected to meet Milan’s £24m valuation of the striker, however they face stern competition from affluent French side Monaco to secure his services. Arsenal Confident Of Securing Midfielder To A New Deal