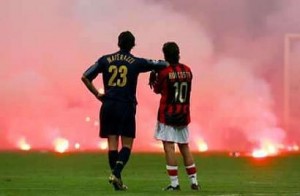 A new chapter of the eternal Milanese rivalry will be written this Sunday night in the Derby Della Madonnina. AC Milan will be thriving off the back of their 2-0 shock win over Barcelona as they look to extend the one point gap in the league. Inter brushed aside their Transylvanian opponent CFR Cluj in the Europa league to set up a repeat of their epic encounter with Tottenham and Gareth Bale in 2010.

The headlines will no doubt center on Baloetelli the former Inter man who’s switched his stripes from blue to red. The arrival of the mercurial super Mario has spurred on the team as he looks right at home scoring in every game and proving particularly clinical from dead ball scenarios. The Rossoneri have recovered from their worst ever Serie A start to find themselves third in the table and eleven points behind Juventus with much of the adulation directed at the young pharaoh Stephen El Shaarawy.

Internazionale will be hoping to forget their 4-1 defeat at the hands of Fiorentina and could potentially win the derby for the fourth straight time in a row, a feat that has not been achieved since 1974. Andrea Stramaccioni may have his hands full with this combination of young Italian strikers. The Nerazzurri’s main attacking hopes may lie with the other notorious Italian bad boy Antonio Cassano. It may all come down to whether Abbiati or Handanovic has the better day between the sticks. One thing is for sure with the coveted champions league spot at stake, the return of Mario and the heated San Siro this is the most anticipated and exciting game of the season.