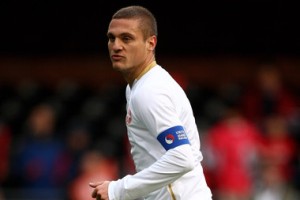 Interesting news are out and it has been reported that AC Milan are determined to test Manchester United’s resolve over Nemanja Vidic.

It has been reported that San Siro vice-president Adriano Galliani wants to overhaul the ageing rearguard that recently conceded seven goals over two legs against Manchester United in the Champions League, and see the Serbian international stopper as the ideal partner for Thiago Silva.

A club source said: “Milan have made a top centre-half their overriding priority.

“Vidic is the one they want – but whether United are willing to do business is another matter.”

It is believed that AC Milan will offer £20 million for Vidic at the end of the season.