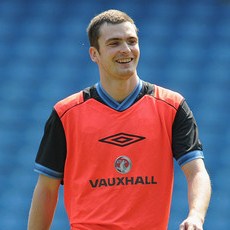 The 24 year old former Middlesbrough winger is now more determined than ever to force his way into Roberto Mancini’s early season plans and win back his place in the national team by proving what an asset he can be in pre-season.

“It was pretty hard watching from the side-lines because obviously you want to be out there, helping the lads,” he told City’s website.

“It’s tough, but you have to keep plugging away and just give your all. We won the title which was the main thing, but obviously you want to feel you’ve played your part, too.

“Things can change pretty quickly in football and this is a new season and we all start with a clean slate once again. What I need to do is respond, try even harder and react positively.

“On a personal level, it was a disappointing end to the season for me because I wasn’t playing for City and then I missed out on Euro 2012 which hurt me a lot, but the key is to bounce back and not dwell on things.

“I love everything about this club – the lads, the people around it and the supporters have always been brilliant towards me. I’m settled where I live so I just need to get out there and play – as a footballer, that’s all I want to do.”