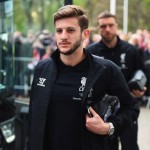 It has been reported that Liverpool midfielder Adam Lallana is not giving up on a top-four finish.

The Reds find themselves four points behind fourth-placed Manchester United with three fixtures remaining and Lallana is confident that the Anfield club can still finish above their historic rivals.

“It’s not over yet,” said Lallana. “We can still finish in the top four but we need to take maximum points now. We’ll keep fighting right to the end. We all know what can happen.

“United have some tough games to play and I am sure they will drop more points.

“We have to put pressure on United by going to Stamford Bridge and getting three points. Pressure is a tough thing to deal with.

“We need to beat Chelsea and Palace and hope it all comes down to the final weekend.”