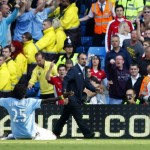 Emmanuel Adebayor has been hit by two charges over his antics at the weekend and the Manchester City striker faces a three-match ban for stamping on Arsenal striker Robin van Persie.

A statement from the FA read: “Referee Mark Clattenburg has advised that he did not see this incident, but has confirmed that had he done so, he would have sent Adebayor off for violent conduct.”

It is now reported that Adebayor could also face punishment for his goal celebration when he ran 90 yards to taunt Gunners fans and the statement added:”The Greater Manchester Police have written to The FA with their views on this incident and a separate date will now be arranged for a commission to consider Adebayor’s goal celebration.”

The Togo international striker will also miss the Carling Cup tie with Fulham and a Premier League clash with West Ham on September 28.

The FA would need to set up a disciplinary panel to review the celebration and Adebayor will hope for leniency in that matter though, given the aggravation he received from the Arsenal supporters.