Emmanuel Adebayor insists Tottenham players do not need picking up for their clash with Arsenal. 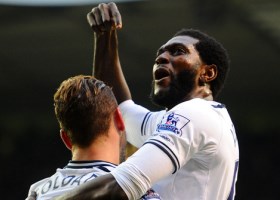 Spurs go into the game on the back of two defeats.

The Togo international striker said : “There are some games where you have to give a little bit of motivation to the players. We know how good we are at home when it comes to Arsenal and we won’t have to motivate anybody for this game,”.

“This is the game that everybody will be talking about in London from this point: Tottenham v Arsenal, The north London derby.

“And people like Aaron Lennon, who has been here for ages, you won’t have to tell players like him anything either. He knows how big it is for the club and the fans. To be honest with you, we are all looking forward to it.”