It has been reported that Manchester United winger Adnan Januzaj is proud to be wearing the coveted No11 shirt. 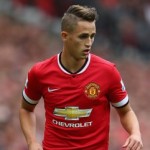 Ryan Giggs owned that jersey for the last two decades, so the diminutive Belgian felt pride – and pressure – when he pulled it on at the weekend.

“It was a big honour for me and my family and I was very happy to have it given to me,” the young midfielder said.

“There is pressure on me because there was a legend in front of me who had it for 20 years, but I am really happy with that.”

Januzaj was keen to stress nothing should be read into the Swansea City defeat, which came as a big shock given that Swansea are among the favourites to be relegated this year.

“It was a very disappointing match but it’s only the first one of the season so it’s nothing,” said Januzaj, who came on for the injured Lingard in the first half.