It has been reported that Adnan Januzaj was quick to pass on his best wishes to Manchester United teammate Luke Shaw. 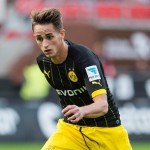 Januzaj, who is on a season-long loan with Borussia Dortmund, saw the incident which is likely to see Shaw sidelined for a lengthy spell. Danny Welbeck Called Up By England For Ghana Friendly