Manchester United winger Adnan Januzaj has signed a new contract that will keeps him at Old Trafford until the summer of 2018. 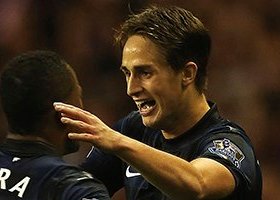 The 18-year-old Belgian-born attacking midfielder has been in the headlines of late after scoring twice in United’s 2-1 win at Sunderland a fortnight ago.

He had impressed during pre-season to win a place in United’s side but his future had been called into question with his previous deal having been due to expire at the end of the season.

Januzaj told United’s official website: “It’s a great thrill to be able to sign for Manchester United. Since arriving here I have always felt like this was the right club for me.

“This season has been great for me – going on the pre season tour, making my debut in the Community Shield win at Wembley and then breaking into the team at Sunderland – it’s like a dream. I want to work hard now and establish myself as a Manchester United player.”

Manager David Moyes added: “I’m delighted that Adnan has committed his future to United. He is an outstanding talent and has impressed me consistently since I came to United in July.

“His balance, poise and ability to beat players is truly exceptional for a boy of his age. It’s great that he recognises that this club, with its tradition for developing young players and giving them a chance on the biggest stage, is the best place for him to be.”