It has been reported that Adnan Januzaj returned to scoring form for Manchester United’s U21s on Monday. 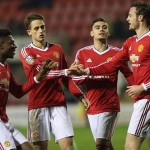 The Belgium international midfielder scored a brace for Warren Joyce’s side while Will Keane also chipped in with a double as the attacking duo dazzled in the 4-0 win over Southampton.

Januzaj, in his first appearance for the Red Devils since returning from his loan spell at Borussia Dortmund, struck first on 45 minutes when he was found by Keane before seeing his 20-yard deflect past Saints keeper Paulo Gazzaniga.

The second goal came eight minutes into the second half when Guillermo Varela, who had been fed by Januzaj, sent a cross into the area for Keane to nod home beyond Gazzaniga before helping himself to his fifth goal in two games when converting from the spot in the 69th minute after Januzaj had been pulled back by Jack Stephens.

The contest was wrapped up with a little over 10 minutes remaining when Keane did brilliantly well to cut back for Januzaj who rifled home with his left foot with apparent ease.

It was a dominant performance from United, particularly Januzaj and Keane, with the latter back from a loan at Preston North End and pressing for a potential first team berth under Louis van Gaal.