It has been reported that AC Milan vice-president Adriano Galliani is convinced Keisuke Honda will be a big hit in Italy.

The Japan international has arrived from CSKA Moscow on a Bosman. 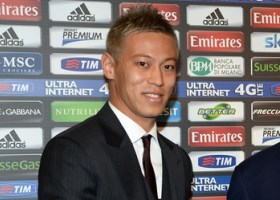 He told Sky Sport Italia : “In a month we have sold more shirts in Japan than we did for the whole of last year,”.

“Honda is a star over there – today there were 80 journalists and several live television crews for the presentation.

“But we signed a footballer, not an icon. If there’s economic advantages then so be it – but we have a player who can coexist with Kaka.

“Jetlag? We have looked into that and between four and six days he should be back to normal.

“And also don’t forget that he hasn’t played for a month. So we have to learn to walk before we run.”