It has been reported that AC Milan vice-president Adriano Galliani has paid tribute to Inter Milan captain Javier Zanetti. 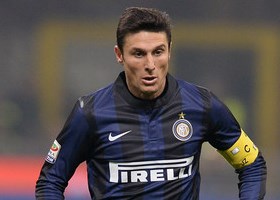 The Argentine has announced his retirement.

“Zanetti? He is a symbol of Inter. Milan have always been a rival of Zanetti but we recognise what he has done.

“He is a player, like Kaka, who is a patriarch of football as a whole.” AC Milan Warned Over Their Pursuit Of Porto Defender Rolando