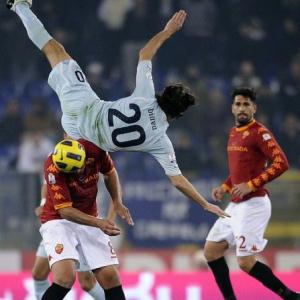 This is definitely one ugly challenge that usually happens in football.

The incident happened between AS Roma striker Adriano and Lazio defender Giuseppe Biava in their Italian Cup football match in Rome’s Olympic Stadium on January 19,2011.

It appears that Biava intended to attack the ball in the air before bundling into the Brazilian striker and coming out worst from the challenge.