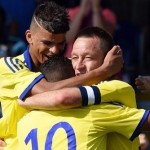 Chelsea came from behind to beat AFC Wimbledon 3-2 thanks to two goals from substitute John Terry.

Nemanja Matic, Mohamed Salah and Kurt Zouma were all named in a young starting team that fell 2-0 behind before half-time courtesy of Alan Bennett’s opener after 38 seconds and Matt Tubbs’ penalty.

Terry was introduced at the interval and the captain scored two goals either side of Salah’s equaliser to seal a second pre-season victory for Jose Mourinho’s men.