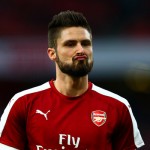 Reports are out claiming that Bournemouth striker Benik Afobe swapped shirts with Arsenal frontman Olivier Giroud following the Gunners’ 2-0 win at the Vitality Stadium on Sunday.

The 22-year-old has revealed that he wanted Giroud’s shirt as a souvenir as he learnt plenty from the Frenchman during his time with the Gunners.

“He is someone I have looked up to,” he said.

“He’s a great guy on and off the pitch. He works hard and scores a lot of goals. When I was coming through the ranks, he was the main centre forward.

“He said some nice words about me before the game. It was nice to hear that from someone who is a world-class centre forward. I don’t know why he gets a lot of stick because he scores goals every season.

“It was nice to see him and play against him. He got my shirt as well. I don’t know how much he wanted it but he has got my shirt.”