Reports are out claiming that a January move to Arsenal could still be on for Dinamo Moscow striker Aleksandr Kokorin. 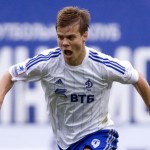 The Russian international have been linked with a move from Dinamo Moscow with Arsene Wenger reportedly interested, following his search for a striker coming to nothing over the summer.

Cyril Loginov said: “Aleksandr, if all well informed, still has a chance [to move in the future] and not just to Arsenal.

“If Dinamo refused to give Aleksandr to Arsenal in the past transfer window, it does not mean that he can’t be where he wants [in the next window].

“We have a very good relationship with the coaching staff and the management of the football club Dynamo Moscow. We have, of course, been notified.”