Reports are out claiming that the agent of Sebastian Giovinco says he could leave Juventus in January. 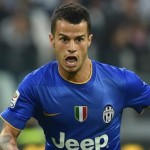 The 27 year old Italian international midfielder has been linked with Arsenal and Liverpool this season.

Giovinco’s agent Andrea D’Amico told Sky Italia today that his future was uncertain with his contract set to expire in the summer.

“You’d have to talk to Juventus about his situation, not me. Clearly they have different plans regarding tactics and investments. I see Giovinco at Juventus until June, but life is made up of concrete facts.

He added: “In all honesty, I don’t know what could happen over the next few months.”