Reports are out claiming that the agent of Tomas Rosicky has revealed the Arsenal midfielder faces two months on the sidelines. 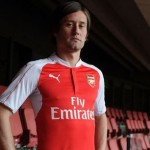 The Czech Republic international has struggled in preseason with knee problems and underwent surgery this week.

“The rehabilitation period is expected to be between four and eight weeks,” agent Pavel Paska told iDnez.cz.

Rosicky signed a new one-year deal with Arsenal in May.