The agent of former Real Madrid captain Iker Casillas has admitted that the Spanish international was not short of offers this summer. 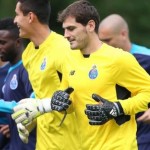 Casillas kept a cleansheet on debut for Porto over the weekend.

Santos Márquez told AS: “The idea of joining a team which had qualified for this year’s Champions League was appealing.

“We did study a few offers from the Premier League but none of them really interested Iker too much. Then Porto appeared. He wanted somewhere near, a good city and Porto fitted the bill. The economic issues were resolved in two trips. They didn’t believe that Iker would opt for Porto while he had other options.” Sergio Ramos : I Would Choose Jesus Navas Over Franck Ribery