Reports are out claiming that the agent of Napoli striker Lorenzo Insigne admits they’re happy with the interest of Arsenal. 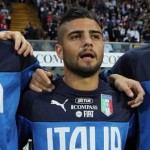 It is said that Arsenal boss Arsene Wenger is keen on the Italy World Cup squad member.

His agent Antonio Ottaiano admits his client is delighted by the attention of the north London giants, but is purely focusing on the upcoming World Cup.

“We take into account the praising reports that Wenger has given about the player,” he told tuttomercato.

“However, from here to take it to the next level, that is a possible transfer, there is a huge mountain in between named Napoli.

“The (Naples) club consider him without a shadow of a doubt as one of their cardinal players for their ambitious project.

“Hence, as of today, I don’t see that there can be any further developments unless Arsenal speak to Napoli directly and Napoli change their view on Lorenzo’s role here.”