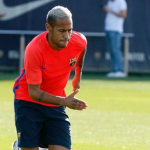 Ribeiro is close to the camp of the Barcelona star.

And he revealed to ESPN Brasil: “He was very close to PSG. He would have earned 40 million euros a year, free.

“Neymar was also close to a move to Manchester United.

“But he renewed his contract for less money with Barcelona, because he wanted to stay in Barcelona.”