It has been reported that the agent of Joel Campbell has warned Arsenal the Costa Rica star isn’t short of offers. 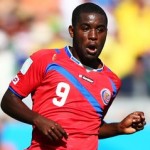 The 22 year old is drawing interest from a host of top Italian sides after starring for his country during their surprise run to the World Cup quarter finals.

“There are several clubs who are in the top band that have made enquiries about the boy. We are talking about a great player here, who has captured everyone’s attention.

“Milan? There hasn’t been anything concrete from them.

“His future at Arsenal is to be assessed after the World Cup.”

Steven Nzonzi Slams Arsenal : They Didn’t Like The Physical Stuff