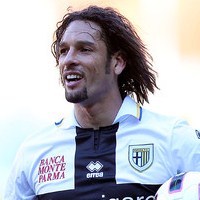 The agent of Juventus striker Amauri insists his client is close to signing with an English club.

The 31-year old Brazilian-born Italy international has been told by Juve that he can depart for free in January after falling out of favour following his big-money move from Palermo in 2008.

Italian clubs such as Napoli, Genoa and Palermo are believed to be showing interest but Amauri’s representative, Ernesto Bronzetti, told Radio Kiss Kiss that he will be playing in England in the New Year.

“Amauri is about to sign for an English club,” Bronzetti said.

“The salary of the Brazilian (born) striker is high and I don’t think he can go to Napoli, even if they are a big club, or at Genoa and Palermo who want him.

“He is not an ordinary player, he was paid 25million euros from Juve, he made his debut with the jersey of Italian national team, last season he has done great things in Parma. And AC Milan? I don’t think they are interested in Amauri.”