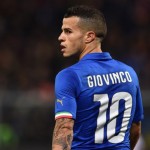 Reports are out claiming that the agent of Juventus midfielder Sebastian Giovinco is aware of rumours linking him with Arsenal.

The Atomic Ant is out of contract at Juventus in the summer and has been linked with moves to both the Gunners and Tottenham.

“At the moment only Juventus can negotiate with him, later on however things can change since he has an expiring contract.”