Reports are out claiming that the agent of Jorginho expects him to be a star with Napoli next season. 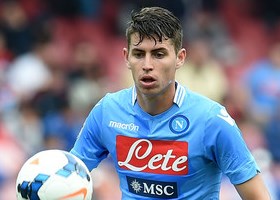 “In Napoli he has a great opportunity,” Joao Santos told Raffaele Auriemma.

“Let’s hope that he can play in Saturday’s final and help his teammates win the cup.

“It could be the first of his career. He is not suffering emotionally though, he is very concentrated.

“He is happy here with everyone. Who he plays with in midfield does not matter, all he is thinking about is doing his best to make sure he is a starter.

“He has played with Inler and together they are a good pair. You just need to see the great match they both had in Milan.

“I never talk to Jorginho about his private life but I know he is happy and has respect for Rafa Benitez.

“Hopefully on Saturday he can start, but I will not be judging his season with Napoli.

“The real beginning of Jorginho’s time at Napoli will be in June. These four months have been good for his acclimatisation.”

Marek Hamsik Wants To Win The Champions League With A Top Club!