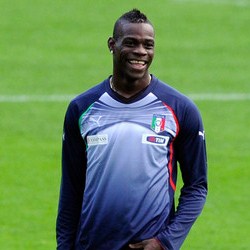 It has been revealed that Manchester City striker Mario Balotelli is not about to leave Eastlands for Serie A giant AC Milan.

The Italian international has again been linked with a move away from Manchester, just six months after joining the Blues, with a return to Milan set for the end of the season.

The reports suggest that it will not be a return to Inter but instead a move to rivals AC although agent Mino Raiola said that this particular move was not a possibility.

Raiola told Radio Kiss Kiss : “One day, perhaps. But he will go elsewhere,”.

“I am single in my work. I am not married to anyone. Balotelli will be free to go where he wants to go when the right time arrives for this.

“For now, it is premature talking about it. I don’t want him to go away from Manchester because City is the ideal team for him.

“The Premier League is perfect for him and he has not shown anything. His next step will be to prove his worth so that AC Milan, Real Madrid, Barcelona, Chelsea or others may have to battle to take him.

“We have no agreements with Milan nor with others. We must not do favours for anyone.”