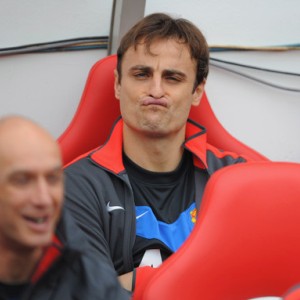 The agent of Dimitar Berbatov has sensationally declared that Manchester United could be the striker’s last club.

Berbatov would be happy to stay with Manchester United until the end of his career, the player’s agent said on Saturday.

Emil Danchev told Bulgarian TV : “I’m almost sure he will finish his competitive career with United,”.

“He is a very balanced person and he knows what is best for him.”

Berbatov, whose contract with the Old Trafford side expires in 2012, came under fire for not scoring enough goals in the first two seasons following his £30.75m move from Spurs in 2008.

The 29-year-old former CSKA Sofia striker was also criticised for being inconsistent and not working hard enough for the team, but he has rediscovered his killer instinct and tops this season’s Premier League scoring chart with 11 goals.

“There are different characters at United and there’s big competition too. Berbatov sets an example to everyone in the team,” added Danchev, who has always represented the player. Man Utd To Include Kagawa In Bid For Borussia Dortmund Duo Reus, Gundogan