Reports are out claiming that the agent of Zenit St Petersburg midfielder Axel Witsel has revealed Serie A contact. 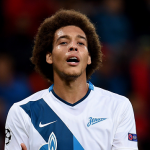 AC Milan and Juventus are interested in the Belgium international midfielder.

“Juve are considering what to do at the moment,” Riccardo Napolitano told FantaGazzetta.

“They value Witsel highly and have been following him for several months. We’ve had some positive signals, but for now things are on hold.

“Milan? The Rossoneri have followed him constantly and have never dropped their interest. The interest of Juventus is a bit more dated.

“There’s no team in pole position, because all it would take is an important offer from either side to make the breakthrough.

“That’s the way the transfer market is, and things could change at any moment. With an offer of €30m Zenit would let him go, but they could also accept an offer of €25m plus bonuses.

“At the moment there hasn’t been an official offer made to the Russians. Witsel wants to play for a big international club, and Juventus are that, as are Milan.

“Although they aren’t in the Champions League, Axel still considers Milan a top club.

“From the middle of August onward every day is a possibility to complete the deal.

“I think this negotiation could be one which is destined to run until the last days of August, when usually [Milan CEO Adriano] Galliani pulls off a last-minute coup.”