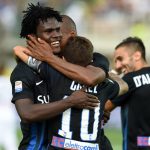 The Sun says the Gunners are one of several top European clubs chasing Atlanta midfielder Kessie, 19, according to reports.

Kessie’s agent told Goal: “They [Arsenal] were here in Italy to watch him.

“Arsenal are a good team but there are a lot of teams interested in him so they’re not the only possible destination.”

Kessie has scored four goals in five matches this season and has drawn comparisons with Manchester City’s Yaya Toure.