It has been reported that the agent of Porto whizkid Juan Quintero admits a move to Arsenal is on. 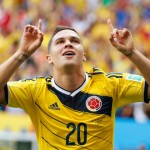 Reports out of South America on Thursday night said a fee has been agreed for £15.8m and that Quintero was on a flight to London Heathrow.

It is said that the attacking midfielder took a flight From Medellin to Bogota before flying to Heathrow with a ticket for seat 6A according to Colombian reports.

“Today @juanferquinte10 travelled to England to sign a contract with Arsenal who are paying 20m Euros (around £15.8m) to FCPorto, congratulations!”