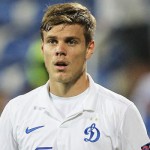 It has been revealed that Russian international Aleksandr Kokorin is interesting Manchester United and Tottenham.

Kokorin’s agent, Christophe Yutto, has confirmed the interest of the Premier League duo in the Dinamo Moscow striker.

He told TASS: “At the moment I’m working on a transfer for Kokorin. His services have interested Manchester United and Tottenham.

“There is every reason to believe that the player will be at one of those clubs by August 31.”