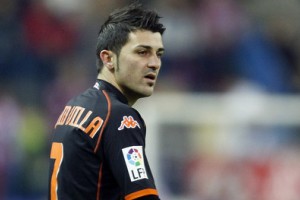 David Villa’s agent has again stressed that his client is not in talks with any club about his future.

Valencia remain in a poor financial state, but so far they have managed to hold onto their star players, with Villa their most prized asset.

However it is reported that Manchester United, Manchester City, Chelsea, Barcelona and Juventus are all ready to test Valencia’s resolve.

His agent Jose Luis Tamargo insists that Valencia have not informed them of any decision about his player’s future.

He told reporters that : “First of all, no one (from Valencia) has contacted us to tell us that David Villa is for sale,”

“Reports say that David could be sacrificed to cover the debts of the club, but nobody has said anything.

“I have no news. Right now David is happy at Valencia and he is not thinking about the market.”