Reports are out claiming that Keylor Navas is pushing for an improved deal from Real Madrid. 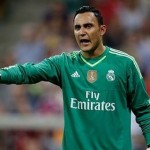 Sport claims that Navas’ agents are insisting Real hand the keeper a pay-rise for compensation after Monday’s fiasco.

They also claim that Navas deserves the deal simply as he’s now the No1 goalkeeper for the world’s biggest club.

Navas was all set to move to United as part of the De Gea deal before everything collapsed on Monday night.

Pedro Delighted To Be Playing For Chelsea Boss Jose Mourinho