It has been reported that Sami Khedira’s agent has declared that Real Madrid have not yet agreed a fee with Arsenal for the transfer of his client. 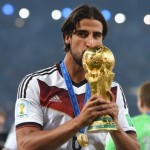 Recent reports suggest that the Germany midfielder was on the verge of joining the Gunners after he was unable to agree an extension with Real but his representative Jorg Neubauer suggests that speculation is untrue.

“We are not in talks with Arsenal,” Neubauer told The Telegraph of the World Cup winner who has also recently been linked with Chelsea.

“I don’t think a fee has been agreed, otherwise I would have been told.

“When a club have an interest I am sure they will call me and we will speak about things. The same goes for Chelsea.

“We are talking to Real Madrid about his contract, but nothing is close to being decided. Sami has just returned from the World Cup and has gone on holiday.”