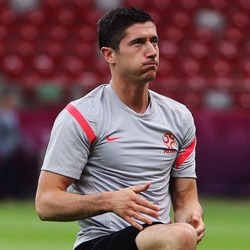 The agent of Robert Lewandowski has cooled talk of a move to Juventus for the Borussia Dortmund striker.

The Polish international striker has also been linked with Manchester United and Chelsea.

Agent Cezary Kucharski told ilsussidiario : “We never even spoke to them. There is absolutely no connection with Juventus,”.

“I cannot say any more on Robert’s future.”