It has been reported that the agent of Cruzeiro midfielder Lucas Silva has confirmed the interest of “English clubs”. 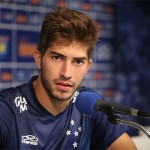 Lucas Silva is being linked with Arsenal and Real Madrid this week, while he has also been watched by Manchester United.

“It’s always interesting to see that the big clubs in Europe are interested in the player. This means that the job is being well done. Lucas plays for the Brazilian champions and is one of the best players of Cruzeiro. We are pleased with the interest of big clubs,” Luiz Rocha told UOL Esporte.

“A lot of enquiries, but nothing official, so far it is speculation. Agents call and say they want to take him to Real Madrid or an English team. I have nothing to talk about.

“I see prices in newspapers and websites, but they are not the true values.”