It has been reported that Kevin De Bruyne’s agent has indicated that his client could be on his way to Manchester City after all. 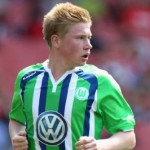 The drawn out transfer speculation continues regarding the Wolfsburg star’s potential shift to the Etihad Stadium but according to Patrick De Koster, things could really start moving this week.

“There is no final agreement with Manchester City, maybe there will be tomorrow,” said De Koster.

Sky Deutschland reported that City and Wolfsburg had agreed a €74million (£54m) fee for Belgium international De Bruyne but neither club have made an official comment on the rumour.