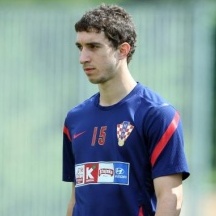 According to Croatian super agent Nikky Vuksan, Dinamo Zagreb defender Sime Vrsaljko is back to his very best.

The 20 year old Croatia international has been a long-term target for Arsenal boss Arsene Wenger, while Inter Milan GM Marco Branca is also a big admirer.

Vuksan, who counts Real Madrid star Luka Modric among his clients, is a big fan of Vrsaljko and is delighted to see the youngster rediscovering his very best form.

Vuksan said : “Vrsaljko is back on track, rising back to the high level of performances we were used to seeing him,”.

“He had small period of crisis but got back on the right track and I expect him to be better then before.”

Asked whether Vrsaljko could make it at Premier League level, Vuksan was adamant.

“He is still young and whether he is ready for top clubs at this moment will only be answered once he goes there and proves that he can adjust.

“He definitely has the potential to play at the highest level.”