Reports are out claiming that Gonzalo Higuain won’t consider walking out on Napoli. 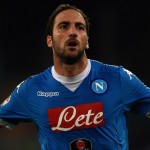 Article 17 allows players who sign a deal before the age of 28 to buy themselves out of contract after three years.

“A great player like him could never take advantage of Article 17, it would make him look very bad and isn’t the style of our family,” brother and agent Nicolas Higuain told Radio Crc

“Three years ago Gonzalo chose Napoli and it’s enough to see what he’s doing on the pitch to understand how much this shirt means to him.

“At the moment we don’t have any appointments lined up with Napoli, I met De Laurentiis in Venice but it wasn’t the right moment to talk about certain things because we were calm and focused on the result to be achieved.”

The Argentine international has been linked with a move to the Premier League with Arsenal, Manchester United and Chelsea.

Carl Jenkinson Delighted With The Return Of Alex Oxlade-Chamberlain