The agent of Borussia Dortmund defender Mats Hummels has revealed that they haven’t heard from Manchester United. 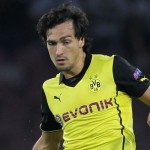 “I know Louis van Gaal from his time at Bayern Munich. However, he has not contacted me about Mats should he move to Manchester,” said the player’s father and agent, Hermann Hummels.

“I’ve heard some rumors but Mats is happy in Dortmund with the current situation, and thinks only about the World Cup.”